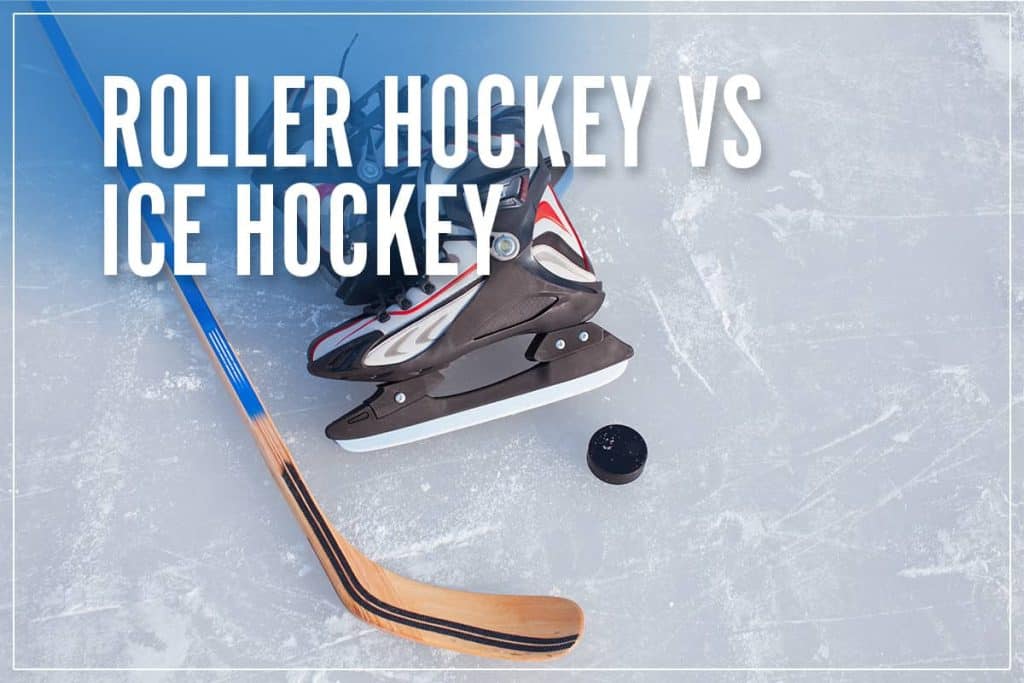 Hockey is a game that comes in lots of varieties, and all of them are super fun! In the US and Canada, ice hockey is the most popular version, but it is usually limited to the winter months. Roller hockey (or inline hockey) is similar to ice hockey, but you can play it all year round!

There are also a few key differences between roller hockey vs ice hockey in terms of equipment, rules and play style. If you are trying to decide which you should play between the two, understanding the biggest differences may help. But the good news is, if you like both, you don’t have to choose! You will have to buy double the equipment though…

The most obvious difference between ice hockey and roller hockey is the skating surface. It probably won’t come as a surprise to you that ice hockey is played on an ice rink! 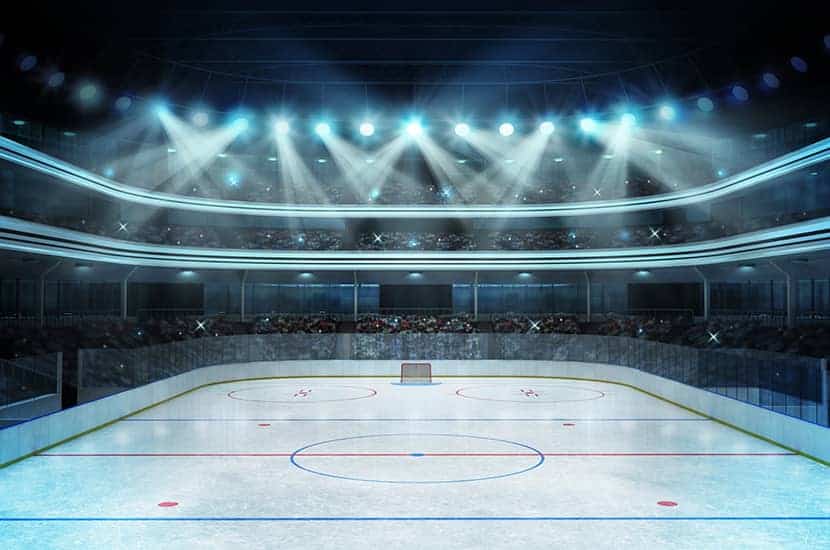 When it comes to roller hockey, there are a couple of different surfaces that may be used. In North America, a roller hockey rink is usually made of interlocking plastic tiles laid onto concrete, known as the “sport court”. The sport court mimics an ice surface quite closely and allows roller players to slide where they stop. This means they can change directions almost instantly like in ice hockey.

In Europe, the sport court is also popular, but some games are simply played on wooden surfaces in gyms.

Besides these minor differences in ice hockey vs roller hockey surfaces, the rinks are pretty similar. The dimensions are exactly the same, as is the size. In fact, many ice hockey rinks are converted into rinks for roller hockey in the summer.

Ice hockey equipment is similar to the equipment needed for roller hockey, but not exactly the same. 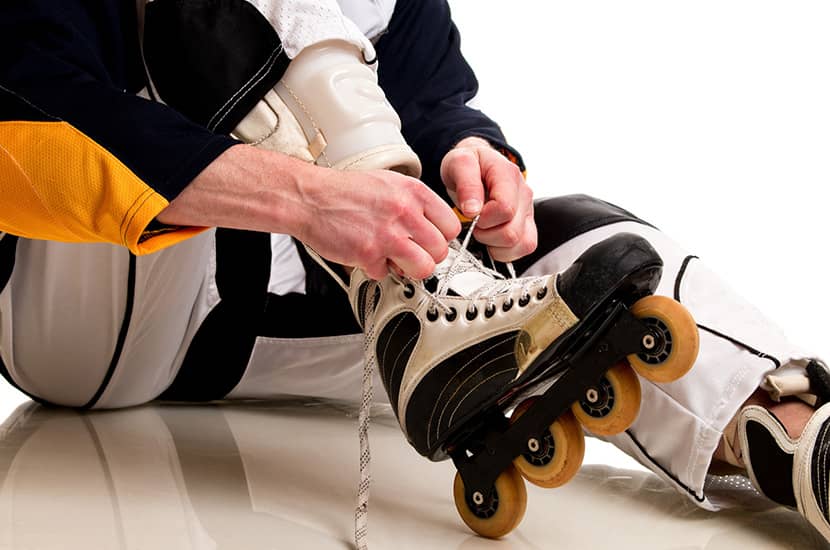 The basic rules of these two fun sports are the same, so we will stick to explaining the differences. 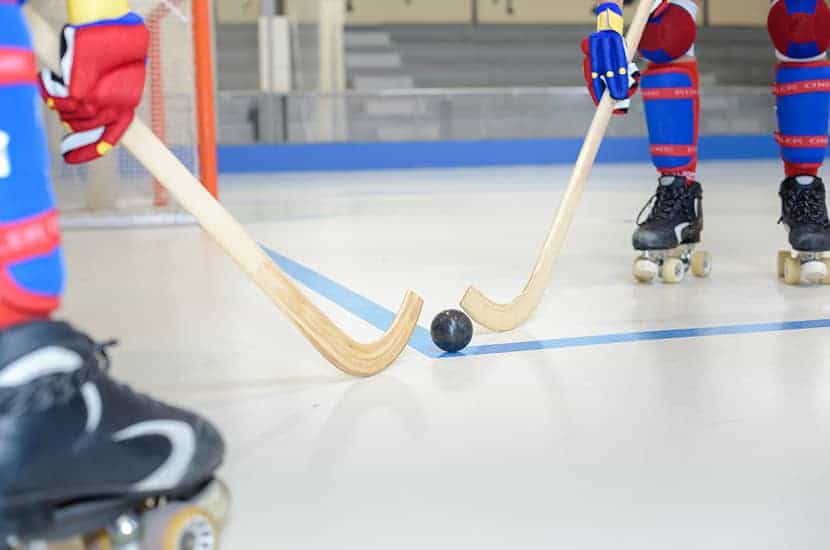 If you’re familiar with ice hockey, you’ll know that games are usually played with 6 players a side, (5 skaters and a goalie). When it comes to the size of the actual teams, the maximum number of players is 20.

Roller hockey teams are smaller, with the maximum number of players allowed being 16. However, most teams are comprised of around 10-12 players and one goalie. In one game, 5 play against 5 (4 skaters and a goalie).

Because the surface area of an inline hockey rink is the same as in ice hockey, the fact that there are fewer players means there is more space. This makes for a slower paced game, but some creative plays!

The difference between the two sports when it comes to player positions is minimal. In ice hockey, we have one goalie, 3 forwards and 2 defensemen. Roller hockey is just the same, except there are only two forwards. Instead of a center, a left winger and a right winger, there is only a center and a winger who moves around the sides. The defensemen tend to stay in the left and right positions.

How Different Is Roller Hockey From Ice Hockey?

Roller hockey is not all that different to ice hockey. Both sports involve using stick handling to attempt to get the puck into the opposing team’s goal post, the rink is the same size, and only minor differences in the rules. Besides the obvious difference of moving via ice skating vs rollerblading, one of the major differences is that roller hockey is played with one less player per team.

How Does Roller Hockey Work?

Roller hockey works by skating with rollerblades on a surface of interlocking plastic tiles. Just like in ice hockey, players compete to score goals by hitting the puck into the opposing team’s goal post. Teams are divided into forwards, defensemen and a goalie, though there are only two forwards. There are no zones or offsides, and icing is not considered an infraction, making it more of a strategy and possession game.

Ice hockey came before roller hockey, but only just. The precursor to both games was field hockey, for which the first club emerged in 1861. The invention of ice hockey is credited to McGill University students in Montreal in 1875. It appears that the first game of roller hockey was played at a roller rink in London in 1878. However, early incarnations of the game were closer in kind to field hockey. The version that takes its inspiration from ice hockey emerged much later.

Roller blading is not harder than ice skating. Most people find rollerblading to be easier to learn; the main reason for this is the thickness of the blades. While rollerblades are made from relatively thick wheels, the blades of ice skates are very thin, making them much harder to balance from.

What Are The Three Types Of Hockey?

The three types of hockey are ice hockey, roller hockey and field hockey. Field hockey emerged from the UK and is still popular in Europe and parts of Africa, Asia and Australasia. In contrast, ice hockey is most popular in Canada and the USA, and in colder regions such as Scandinavia and Russia. Roller hockey is not as common, but is fairly popular in Latin American and European countries, and in some parts of the USA.

We hope this has cleared up any confusions you may have had vis a vis roller hockey vs ice hockey. Although there are some key differences, the two games are very similar. Oftentimes, the one you end up playing is a matter of convenience, such as whether there is a rink nearby, where the major tournaments are and cost differences. But whichever version you choose, we hope you enjoy playing hockey!