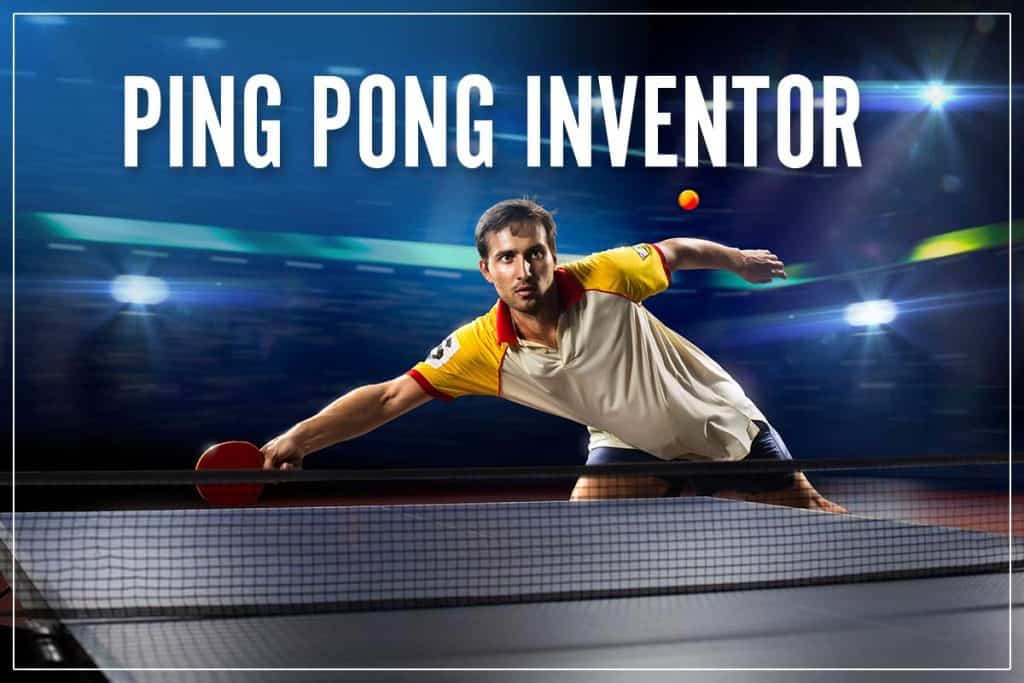 Today, table tennis is popular around the world, played both for fun and in professional tournaments. These days, Chinese players dominate the competitions, so you would be forgiven for assuming it originated there. Actually, the origins of ping pong lie in Victorian England, where it began as a parlor game that evolved from lawn tennis.

So how did this makeshift game become an international sport played by millions? And who actually invented table tennis? The game of table tennis as we know it today looked very different when it began and it has gone through many iterations over the years. This brief history will tell you who the ping pong inventor is and how the game developed into what we know it as today. 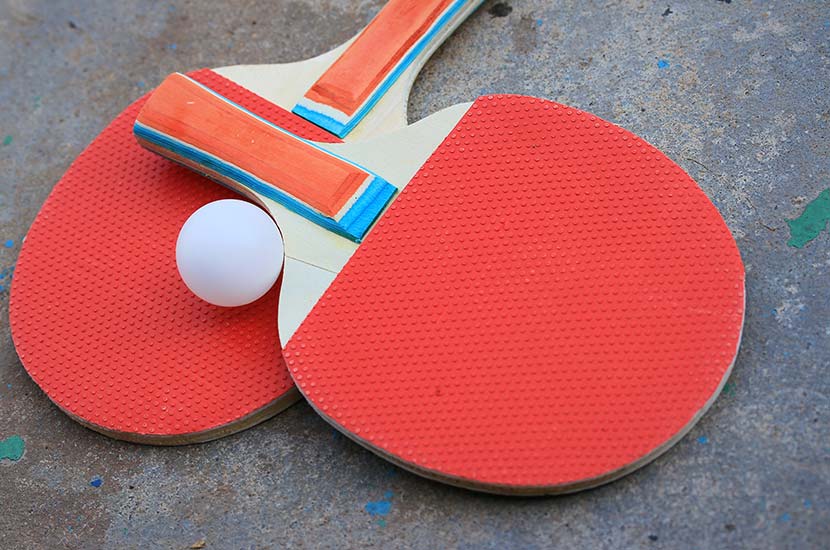 The Englishman David Foster invented ping pong in 1890. At least, he filed for a patent on a version of the game – though it was not called ping pong yet. Before that, middle class Victorian society had been playing makeshift versions for some years.

In the late 19th century, lawn tennis was becoming popular in England. However, players were often forced indoors by bad weather. This led people to improvise indoor tennis variations – the first table tennis game was played with a cork as the ball, cigar boxes as paddles and stacks of books as the net!

During this time, board and dice game versions called table tennis were also making the rounds.

It was from these makeshift beginnings that David Foster invented table tennis in 1890, which included a rubber ball, string rackets and a solid wall instead of a net. A year later, Emma Barker filed for a patent for a mesh net.

In the years following, table tennis grew in popularity. However, instead of the standardized game we know now, there were several versions by different manufacturers. Game makers John Jaques & Son introduced a variant called “gossima” that used a cork ball. Other versions included:

However, both Foster’s and Jacques & Son’s variants had issues – Foster’s rubber ball bounced too much and gossima’s cork ball did not bounce enough. The real breakthrough came in 1901, when James W. Gibb introduced the celluloid ball.

Later in the same year, E.C. Goode invented today’s paddles, combining a wooden blade with pimpled rubber sheets. This was also the year that Jacques & Son put out a new version of the game called “ping-pong”.

Despite ping-pong’s popularity, Jacques & Son threatened legal action against any tournament organizer that used the name without their equipment. As a result, an alternative non-trademarked name was required and “table tennis” was chosen.

In 1921, the first official table tennis association was founded, known as Table Tennis England. It was also around this time that the game became popular in the USA. The game of table tennis became standardized and began to soar in popularity around the world.

Significant Dates In The History Of Table Tennis/Ping Pong 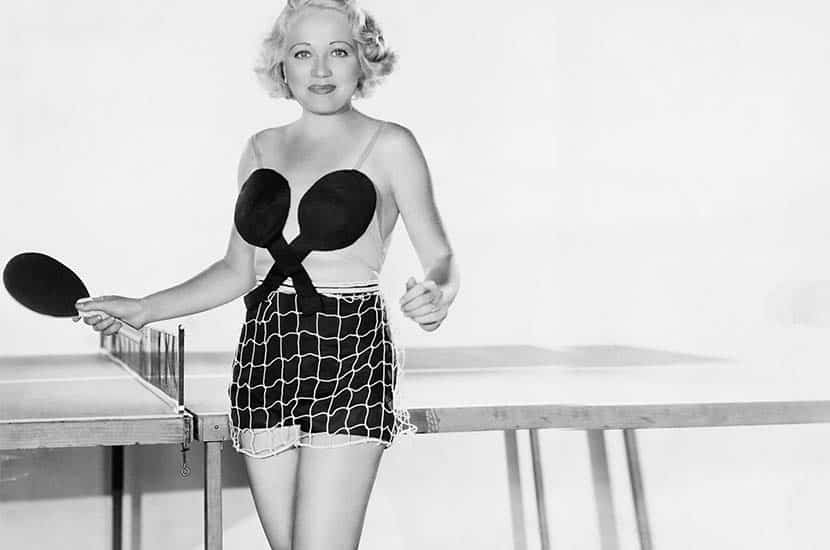 The International Table Tennis Federation (ITTF) was founded and the first set of official rules was formulated. At the time, the participating countries were: This was also the year of the first table tennis world championship, held in London.

The rules now state that the ball must begin on the flat palm of the hand when serving.

The first sponge rackets were introduced. In this year, Japanese player Hiroji Satoh won the world championships with a racket that sandwiched a layer of sponge between the hard surface and the outer rubber. The sponge layer enhances both speed and spin, making it the racket design of choice for all top players. If you’re looking for your own awesome racket, click here.

Table tennis became an Olympic sport for the first time, at the Olympic Games in Seoul, South Korea.

The International Table Tennis Federation formed its pro-tour as an alternative to the world championships. They offered superior organization and greater prize money in an attempt to bring the world’s best players together.

The scoring system changed, reducing the score needed to win a game from 21 points to 11 points. This made the game more exciting for spectators, since every point was now much more crucial. 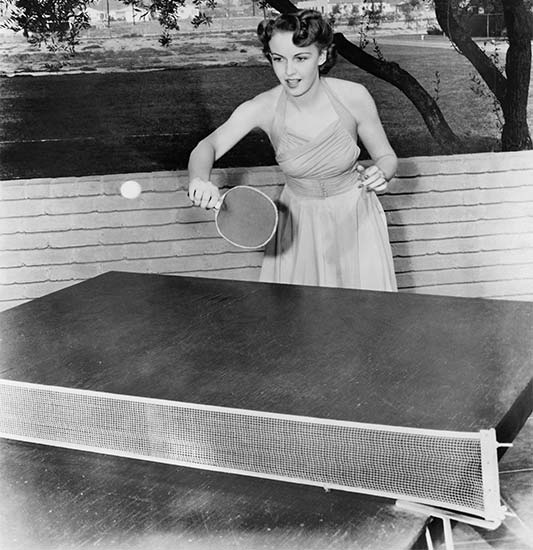 In late 19th century England, lawn tennis was extremely popular. However, bad weather often drove people indoors, leading them to improvise with makeshift table versions of the game. In 1890, Englishman David Foster patented an official design with its own tables.

Where Did The Name Ping Pong Come From? Trademark Issues

Ping pong vs table tennis – is there a difference?

In 1891, Emma Barker patented the mesh net. Foster’s version of the game had used a solid wall instead.

1891 was also the year that manufacturer John Jacques & Son put out a version called “gossima”, that used a ball made of cork.

In 1900, the same company introduced a variant that utilized the newly introduced celluloid balls and called it “ping-pong”. This name caught on, but Jacques & Son would not allow tournaments to call it that if they were not using Jacques & Son equipment.

Whiff-whaff was one of the many early names for ping-pong. Other names included pom-pom, pim-pam and clip-clap. 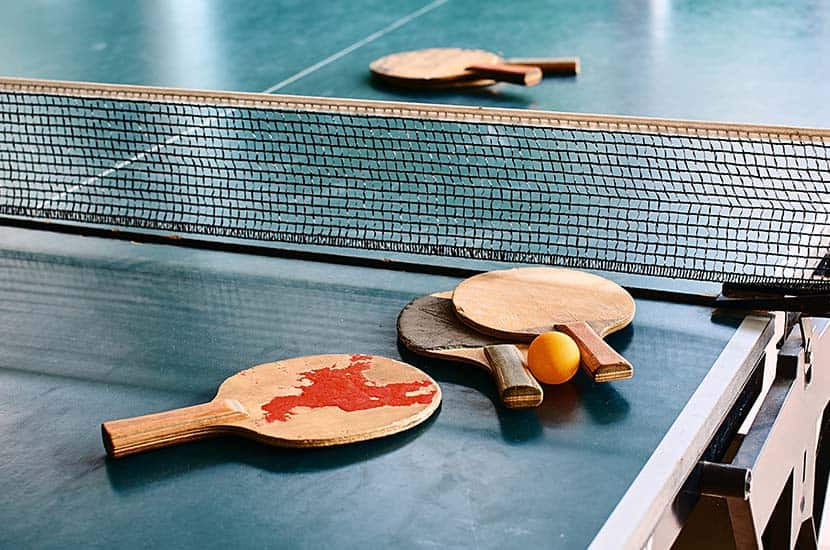 The table patented by David Foster would look unfamiliar to modern table tennis fans. His had a wooden frame all around it and long side nets.

David Foster’s table tennis bats were string rackets. Later on, rackets wrapped in parchment paper became popular. As time went on, people began to stick all sorts of materials such as sandpaper, cork or animal hide to their rackets. In 1902, E.C. Goode put rubber on the paddle for the first time, which evolved into today’s paddles. Click here to learn how to hold one.

In 1988, the game of table tennis made it into the Olympics for the first time.

Over the years, the international rules of table tennis evolved multiple times.

In 1937, the length of a game was limited to 20 minutes and finger spin serving was banned. In 2001, the winning score was changed from 21 points to 11 points. Chances are, the rules will continue to be amended as players find more ways to outwit their opponents!

Who Invented Table Tennis And What Year?

David Foster invented table tennis in 1890, when he filed for a patent for a design of the game. Before then, makeshift versions had been played on dining tables, using ordinary household objects for the ball, paddles and net. In the following years, multiple different versions of the game were produced by different manufacturers.

Where Was Ping-Pong Invented?

Ping-pong was invented in England. However, David Foster’s version of the game was not called ping-pong. The first version to call itself ping-pong came from the games company John Jacques & Son. They trademarked this name, so tournaments were not allowed to use it unless they made use of Jacques & Son ping-pong equipment.

When Was Ping-Pong Game Invented?

The game known as ping-pong was invented in 1901, as that is the year Jacques & Son released their version by that name. However, this was a variation on earlier designs, the original having been patented in 1890 by David Foster. The name table tennis was eventually agreed upon as the non-trademarked official game.

Who Is The Father Of Table Tennis?

The father of table tennis is David Foster, because he was the first person to patent an official design for the game. However, today’s table tennis looks very different to the version invented by Foster, from the table to the racket to the rules. Today’s table tennis is what it is because of innovations in equipment over the years and the standardization of the rules from the ITTF.

Now you know who the ping pong inventor is and why the answer is not so simple! Hopefully, this article has given you a renewed interest in table tennis. From casual dice games and balloon games played in English parlors to a fast action game played in international championships, table tennis/ping-pong has gone on an extraordinary journey!