How To Play Pickleball | Beginners Guide To The Rules 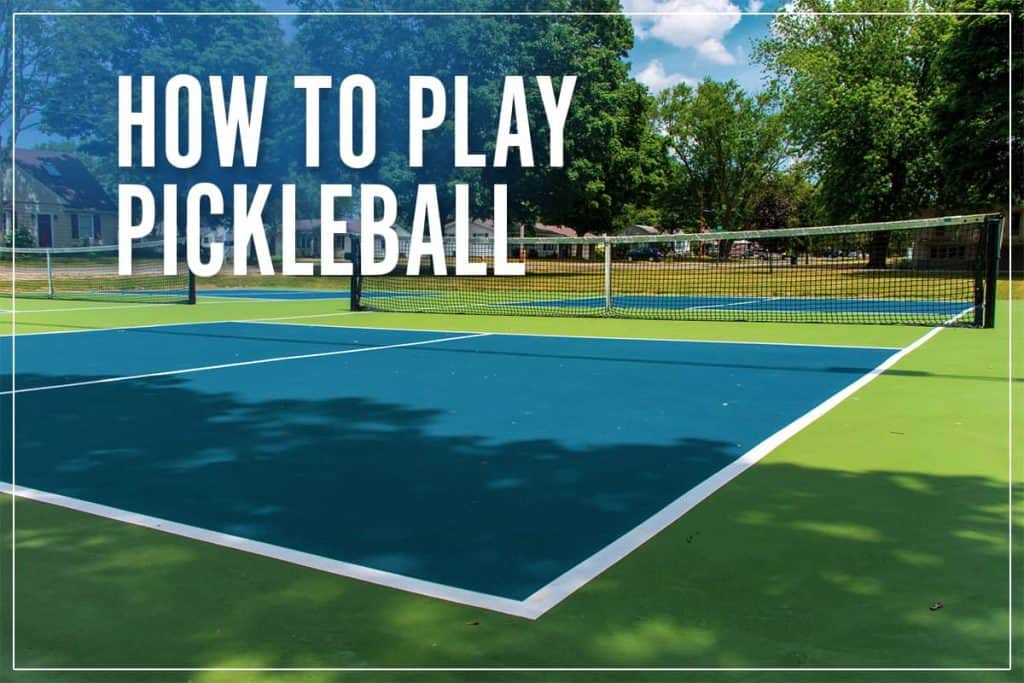 If you have never heard of pickleball before then we are glad to inform you. This sport is quickly gaining popularity due to its ease of accessibility and how much fun it is. Anyone can learn how to play pickleball as the rules are quite simple. All you need is a court which most major cities already have which is probably located in your local park – you may have walked past it a thousand times without noticing. With small pickleball paddles and a very forgiving ball this is a safe sport that provides plenty of heart-pumping exercise. Play with partners as well to really up the competitive level. But before you do that read below so you will have a leg up on your opposing team.

The Basics Of Pickleball

We will go through the pickleball rules you need to know to get started and enjoy your game of pickleball.

Pickleball is played on the same size court as badminton, 20’ x 44’, and is split into three sections that are identical for both sides of the court.

The net extends the entire width of the court and is 36” high.

The pickleball court remains the same for both 1v1 play and for 2v2 matches, so the best pickleball set will be perfect for either.

To serve the ball, the server must keep both feet behind the back line. Starting in the right-hand service square, the server will serve to the service square diagonally across from them. A server must swing underhanded and must keep their racquet below their waist when they hit the ball. The ball must be struck on the upward motion of the server’s swing, and the ball must also bounce in the diagonal service square before the receiving team can return it. If a serve’s first ball bounce is within the non-volley zone then that is a fault and the serving team loses its serve and it switches to the receiving team. Only one serve attempt is allowed.

The double bounce rule affects the serve and the return. When serving, the opposing team must let the ball bounce within the service square. This is the first ball bounce. During the return, the ball must bounce in either of the service boxes on the serving side of the court. Once these two bounces happen, the double bounce rule has been satisfied and both sides are now allowed to volley whenever they want.

4. The No Volley Zone

The no volley zone is a 7’ section that is on both sides of the net. No volleys may be performed by a player who is within this non-volley zone. It is considered a fault if a player steps in or on the line of this zone either before, during or after a volley shot.

This non volley zone rule is meant to protect against smashes or spikes.

To win, a player or team must be the first to score 11 points. You must win by at least 2 points for the game to end, and you can only score points when you are on the serving side. If a “point” is scored by the non-serving team or player then no point is recorded but that team now gains control of the serve.

Can You Play Pickleball With 2 Players?

Yes, you can play pickleball with only 2 players. One player will stand on either side of the court and all the same rules of team pickleball would apply. The court is also the same. Unlike tennis which denotes a smaller playing area than a tennis court for two players, pickleball is played on the same court for both 1v1 and 2v2 so the ball out of bounds area is the same.

How Many Hits Per Side Do You Get With Pickleball?

Players only get one hit per side. The ball must be returned over the net and within the lines of your opponent’s side of the court. If it’s after the serve, you may volley the ball over the net so long as you are not standing in the non volley zone.

What Is The Two Bounce Rule In Pickleball?

The two bounce rule is only in effect during the serve and the subsequent shot. A serve must ensure that the ball bounces within the diagonal service box before it can be returned. That return must also bounce once before the serving team can hit it. After those two bounces occur then either team can now volley whenever they want. The double bounce rule eliminates the serve and volley advantage.

Can You Slice Serve In Pickleball?

Yes, you can slice serve in pickleball. This is a tough maneuver to master but with some practice you can confuse your opponent and make it very difficult for them to return the serve. Slicing refers to the spin you impart after you hit the ball. By “slicing” your paddle through the ball you put extra spin on the ball so when it hits the ground its bounce is unpredictable.

Can You Hit A Pickleball With Your Hand?

Whether playing doubles or one-on-one, pickleball is a great way for people to enjoy a racquetball game in a leisurely manner. It is great for kids as the court is small and the ball is relatively big, making it easy for children to see and react. Learn how to play pickleball and get out there for a great source of exercise, and a great way to get outdoors and enjoy some sun.