How To Play Ice Hockey For Beginners 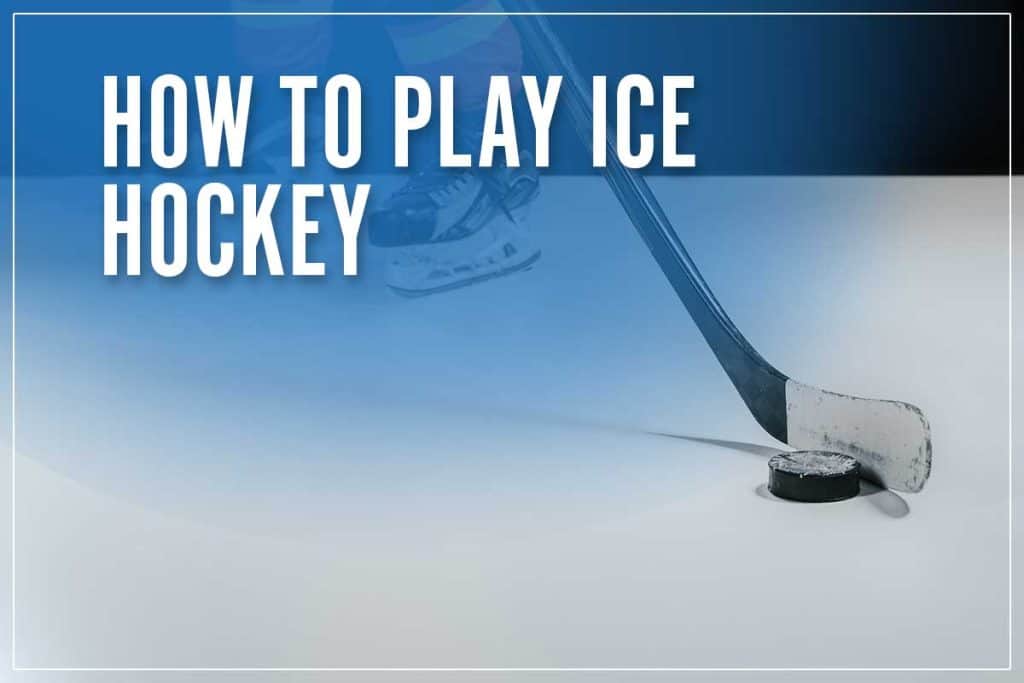 Hockey is more than just slapping a puck around with your hockey stick. It promotes team play in an encouraging environment. Yes, it gets a little rough sometimes but only for sport, not from anger or hate. Once you learn how to skate, the game of hockey will become much easier for you. However, this shouldn’t stop you from learning the official rules. Whether you want to play for your local team in the amateur leagues or you have larger dreams, educating yourself on the way of the puck will be a tremendous asset. Start your hockey career right here with a solid understanding of how to play ice hockey.

An Introduction To Ice Hockey

Before we go through the rules, we will outline some of the fundamentals.

Object Of The Game

To win in hockey, you will need to score more goals than the opposing team. All National Hockey League games play three periods, each starting with twenty minutes on the game clock. If your team has more goals than the other team when the time runs out, your team wins. A goal only counts if the puck has fully crossed the goal line. If each team scores the same amount at the end of the hockey game, then an overtime period is played. The next goal wins the game.

There are a few different positions in hockey, but at first, you will have to decide between one of two positions so you will know which equipment to wear.

There are five players on the ice at a time. Broken down into two groups: forwards and defense. The defense stays back and prevent goals while a forward is a goal scorer. They each have their own position, but all wear the same equipment. Hockey is a very versatile sport where players on defense will sometimes score goals, and forwards will help with defense.

No matter which position you play, you will need ice skates. This game is played on an ice rink so having ice skates is a necessary piece of hockey equipment. This is a full-contact sport, so a helmet is also required.

Other equipment such as shin pads, shoulder pads and elbow pads will provide maximum protection if you play competitively but are not always mandatory.

The Basic Rules – Step By Step 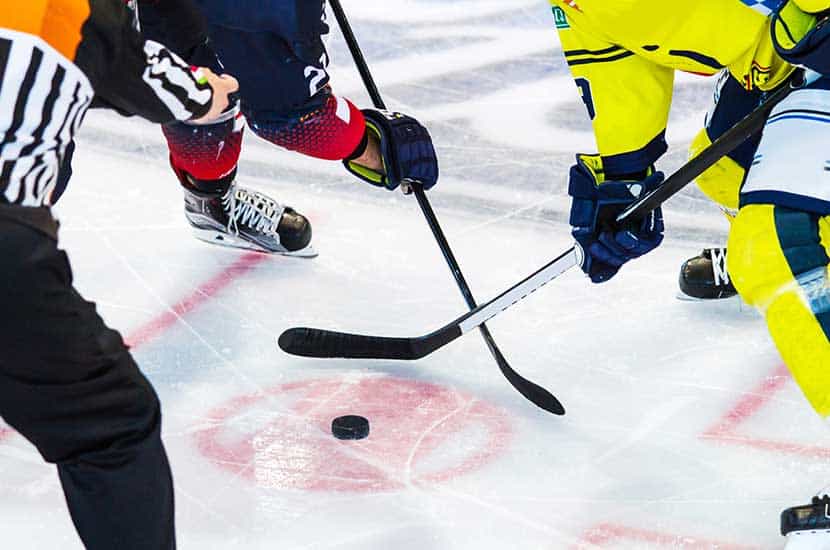 1. You can only score a goal with your hockey stick

No using hands or feet to score goals. If the puck inadvertently goes in off a skate or any other body part, it will count. But no player can purposely score with their hands or feet. The exception to this is high-sticking. That’s when you hit the puck with your stick while it’s above shoulder-level. If this happens, your team’s goal will not count.

2. Body checking and fighting is allowed

Yes, you can body check an opposing player, provided they have the puck. You can only use your shoulder to do so, and it cannot be from behind. If you hit them when they don’t have the puck, you may get assessed a penalty.  Fighting is permitted, but both players will serve penalties for their participation. The duration of the penalty varies amongst the professional leagues.

3. You cannot enter your opponent’s zone before the puck

The blue lines denote each zone. You cannot cross your opponent’s blue line before the puck does. If you enter their zone before the puck, you are called offside, and a face-off occurs in the neutral zone. This is why you may see players straddling the blue line briefly – they are waiting for the puck to enter the zone so they can chase after it.

4. Only 5 players and a goalie are allowed on the ice at once

Having six players on the ice is the maximum you can have. However, you can substitute your goalie for another player if you wish. Teams will do this when they are down late in the game. By adding another player, you put the pressure on the opposing five players since you have one more. The only drawback is that your net sits empty should an errant shot make it way back there.

5. You cannot shoot the puck from your end to the other

You may find yourself and your teammates facing a lot of pressure from the other team. When this happens, it may seem like a good idea to just hoist the puck over everyone’s head all the way down the ice. This is called icing, and it’s not allowed. If you do this, the referee blows the whistle, and a face-off occurs in your zone.

6. If you incur a penalty, you sit in the penalty box for two minutes

A minor penalty is two minutes in the box, while a major penalty is five minutes long. The most common penalties are:

Tripping — This is when you cause a player to fall by impeding his ability to skate. It can be with your stick or any part of your body. No player shall cause another to fall by attacking their legs and feet.

Slashing — You may not use your stick to hit another player’s stick or any part of their body. If your stick makes any kind of descending blow towards your opponent or their stick, that’s a penalty for slashing.

Hooking — No player may use their stick to hold or impede a player’s progress. This usually happens when one player falls behind and uses their stick to hook the opposing player’s hip in an effort to slow them down.

Fighting — Fighting is allowed in hockey in the sense that you won’t get thrown out of the game. However, both fighters will receive major penalties and have to serve five minutes in the box. Usually, these are “off-setting” penalties, and the teams do not have to play short-handed.

All the things you will need to be a top player: 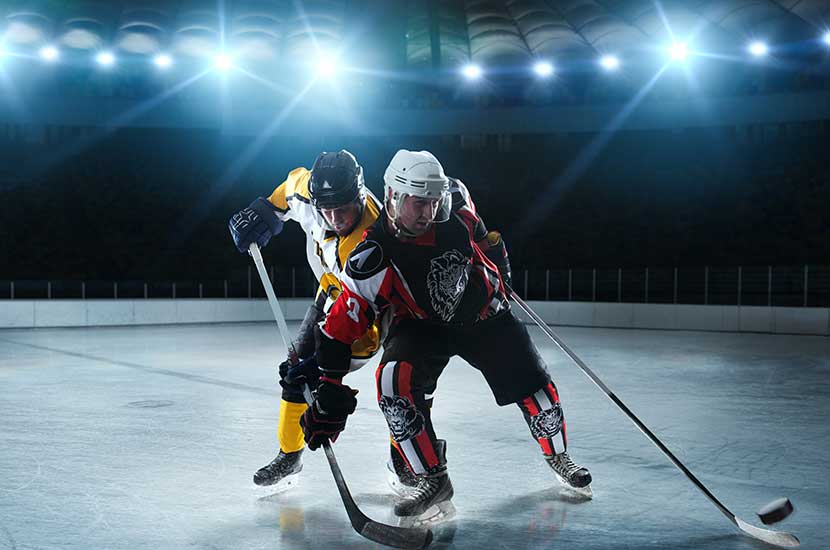 All players must learn how to skate both backward and forward. This is the foundation of hockey and will add to your enjoyment of the game. There are special hockey skates that are available in different models to suit all skill levels. Beginners will require different skates than those who are experienced.

Moving the puck up and down the ice and between teammates is a skill and an art. The best stick handlers in the world make it look easy. This is something you can practice at home in your driveway or garage. Simply moving the puck back and forth will help you become more comfortable and help you protect the puck from opponents as well.

“You miss 100% of the shots you don’t take.” This quote was made famous by the greatest hockey player of all time, Wayne Gretzky. Players have made careers for themselves strictly on their shooting talents. Some are known for accuracy, some are known for brute strength. Either way, shooting is a fundamental skill needed to get the puck across the goal line and enjoy hockey.

Hockey players are some of the most elite athletes in the world. They combine strength, stamina and speed all in one person. While other sports encourage players to focus on one aspect, to be a good hockey player means you can adapt to beat the opposing team. You are able to help all your teammates no matter their position because you are in tip-top shape.

For the most up-to-date hockey lingo, watch a show called ‘Letterkenny’ on Hulu. In the meantime, here are a few to get you started.

Biscuit — Another term for the puck

Bucket — Another term for your helmet

Chiclets — Refers to a players teeth

The Great One — Always in reference to Wayne Gretzky

Pillows — Another term for the goalie’s pads

Playoff Beard — Once the playoffs start, it’s tradition/superstition not to shave your face. The length of your beard indicates how deep you went in the playoffs

Power Play — If you incur a penalty and have to sit in the box for two minutes, the opposing team is now on a ‘power play’ for the duration of your penalty

Sin Bin — Another term for the penalty box

Tilly — Is short for ‘tilt’ which means a fight

How Do You Play Basic Ice Hockey?

To play ice hockey, you need only a stick, a puck, a net and a few friends. The object is to score more goals than the opposing team in its most basic format. As long as you’re using a stick and a puck, it’s hockey. You don’t even need the ice; you can play hockey in your driveway or the local gym.

What Are The Rules Of Ice Hockey?

The rules of ice hockey are that you must use your stick to score purposely. You are not allowed to trip, hook, or slash any other players, or you will incur a minor penalty. And you must ensure the puck crosses the blue line of the offensive zone before you do; otherwise, it’s offside.

Is Ice Hockey Easy To Learn?

Yes, ice hockey is easy to learn but tough to get good at. First, you must learn how to skate. This is the foundation of any good hockey player. Next, you must learn to handle the puck by only using your hockey stick. Shooting is also a necessary skill to learn. Avoid any minor and major penalties to maximize your time on the ice rink, and you will improve fast.

Is Ice Hockey Called A Game Or A Match?

Hockey is called a game. While it fits the description of a match, the most common terminology always uses the term game instead of match. A match would generally refer to individual sports such as a golf match or a tennis match. Although international soccer also uses the term match. But in hockey, we use the word game.

What Are Lines In Ice Hockey?

Learning how to play ice hockey is not complicated; getting good at it is. Due to the skating aspect, you may find it tougher to learn this sport compared to others. You don’t have to learn how to run to play baseball or basketball. But that’s what makes this game so unique, and once you learn, you’ll be part of a tight-knit community. One with its own language and different views on fighting.