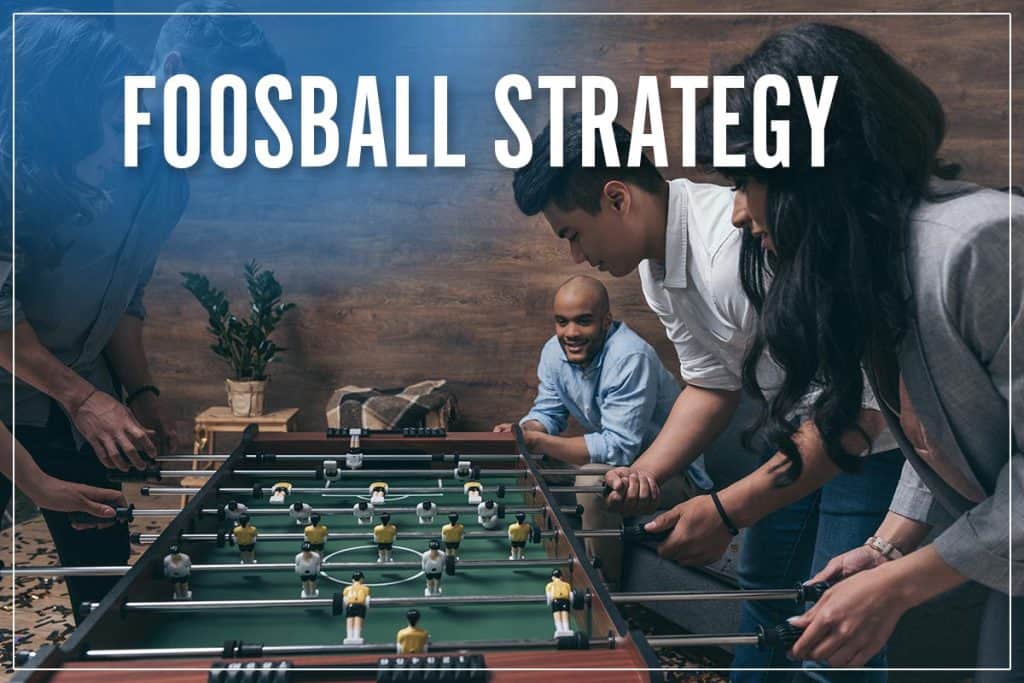 Foosball is a mental game as much as it is a physical one and strategy is key to winning games. Most people who play foosball do so every now and again for the novelty of it and don’t put any effort into developing their skills. They simply pick up the rods and start kicking in any direction they can. But if you want to develop your foosball strategy, there are a wide range of tips and techniques you can apply to improve your game. The below tips will help you with passing, scoring, defending and even serving so you become one of the top opponents in your circle! 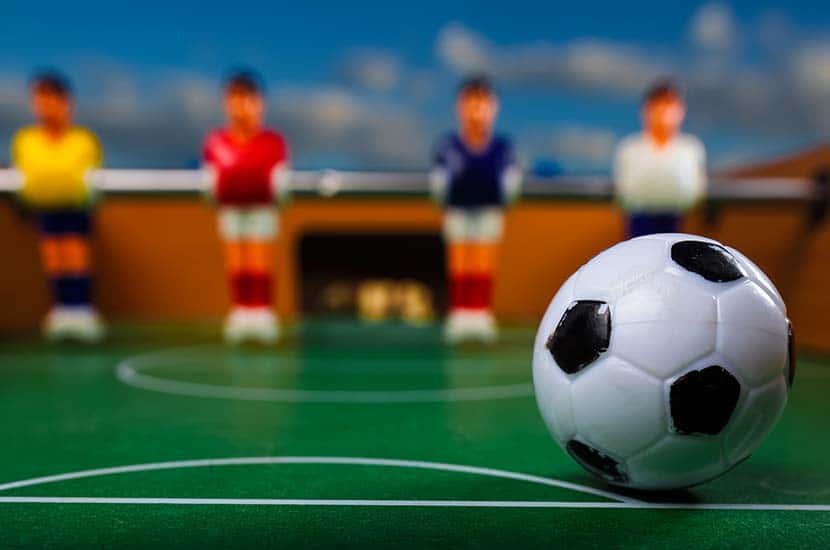 This one is more of a rule – spinning your rods is illegal in foosball. It also leads to a much less accurate shot and it can warp your rods even if you have the best foosball table! Now that we have covered the number one rule, let’s get into the top foosball tips to improve your game. 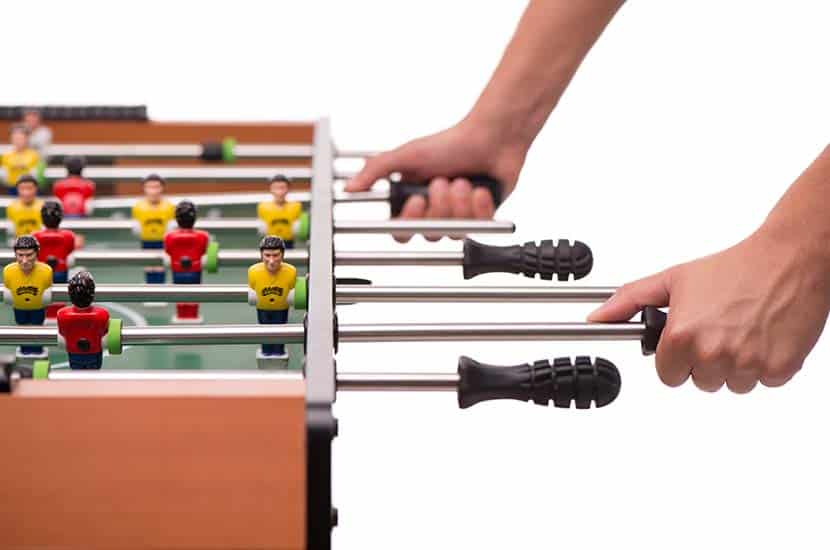 Beginner foosball players often grip the handles way too tightly. Instead, try a loose grip, with your knuckles on top and thumb loosely wrapped around the bottom. This will allow you to adjust quickly while playing different shots.

Use An Open Stance

Just like your grip, your stance should also be open and relaxed. Instead of standing stiffly with both feet parallel, stand slightly away from the foosball table and lean forward at a 45° angle. You should have ample space for your right arm to move freely.

In foosball soccer, there are two ways to score a goal. You can either try to get the ball across the entire table in one kick or you can move it forward with lots of passes. The latter is usually the best strategy as it allows for much more control.

Make sure to move quickly to stay ahead of your opponent! 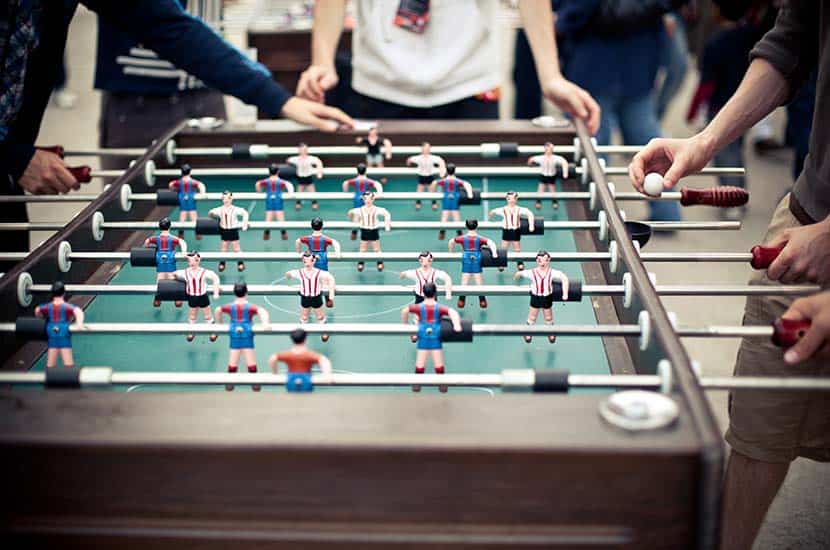 The first serve in a foosball game is a fair serve, meaning the ball is served down the middle of the field. However, after a goal is scored, the side which conceded the goal becomes the serving team.

If your foosball table has a serving cup, you can use this technique to serve the ball to your own side. Place the ball on the top left edge of the serving cup, then release it slowly so it spirals along the right side. When it drops, it should roll toward your 5-man rod.

If you don’t have a serving cup, you can still serve to yourself by applying backspin. Place your thumb on the left side of the ball and push down while you simultaneously push it toward the right and through the serving hole. If done correctly, the ball should stop and roll toward your side when it hits the surface. 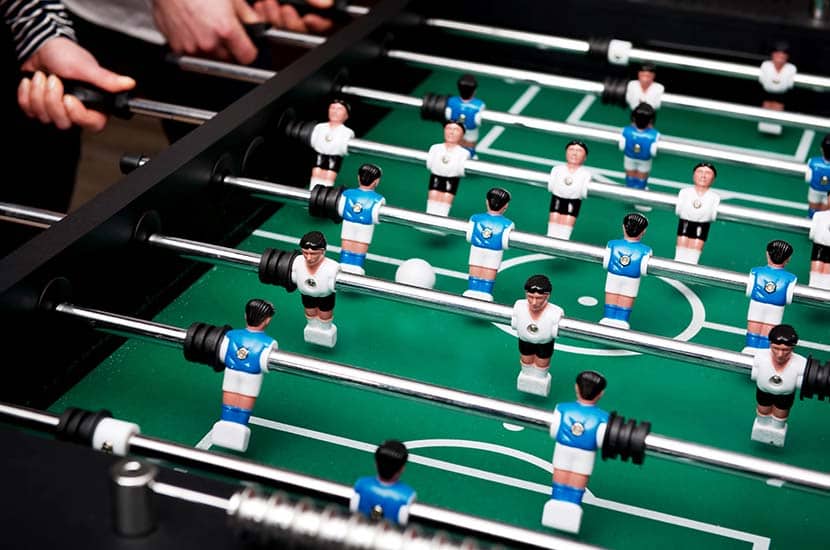 A wall pass is the first pass you should master. Start with the ball on the inside edge of your number two 5-man and position your 3-man forward against the wall. Slide the ball to the wall with your 5-man and quickly slip it through to your forward.

For an even more effective wall pass, try using the lane to prevent your opponent from planting his 5-man against the wall to block it. Shoot the ball from the inside edge of your player but make sure to find a slot before the wall. Have your forward positioned slightly away from the wall to receive the pass.

If your passes are getting too predictable, you can try to redirect the ball with a wall bounce pass. Begin as if you’re planning to pass it up the wall, but instead bounce it in the opposite direction to your number two 5-man. Quickly pass the ball to your forward, which should be positioned slightly away from the wall.

Another way to surprise your opponent is to switch the direction of your passes. For example, pretend to begin a wall pass by sliding the ball in that direction, then quickly shift to your outside edge and pass to your middle 5-man.

Pass From The Defense

Dribble With Your Goalie

This technique can create space if your opponent keeps blocking you from the defensive end. Start by passing the ball back and forth between your 2-man defense and goalie. As you do so, slowly slide along the back line and wait for a lane to open-up. Then, slide the ball forward to your 5-man rod. 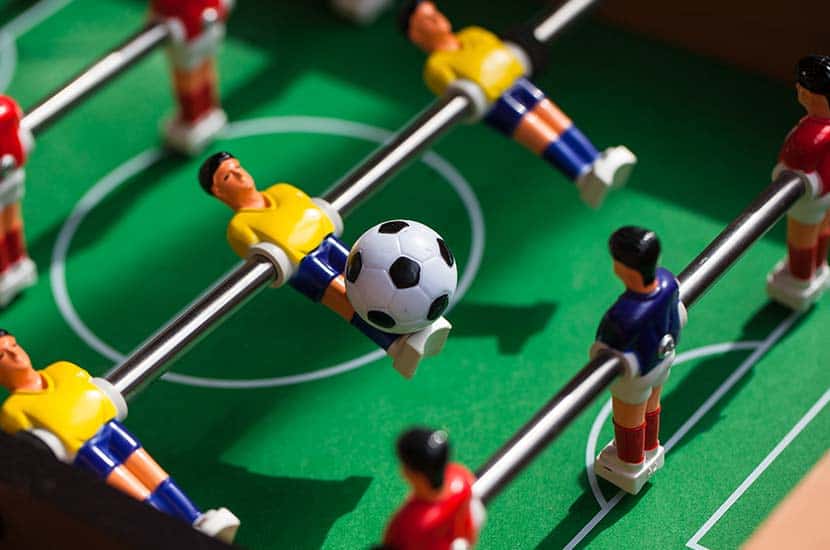 A pull shot is the first shot you should master in foosball. Line your forward up at the far end of the goal with the ball on the player’s inside edge. Pull the rod toward you and when a gap opens up, release your shot with a wrist flick.

A push shot is very similar, except you line up your player at the close end of the goal. Then push the player toward the other side and shoot when you see an opening.

As you may expect, in a push kick you push the ball from the player nearest to you on the 3-man to the middle player, who kicks it toward the goal.

Here is where we begin to get to the advanced shots. A snake shot starts with the ball pinned between the table and middle man on the 3-man rod. Your hand should be completely open, with your wrist providing the force. Then move the man laterally, either pushing or pulling and spin your wrist on the handle to kick the ball.

A bank shot refers to bouncing the ball against the wall in order to score a goal. This works best on the defensive side because your opponent will likely not see it coming.

In a spray shot, you shoot the ball diagonally toward the goal. This is quite a risky shot as it involves shooting from far away.

A dead man shot involves shooting toward the far corner of your opponent’s goal, so that it is hard for them to defend. Even advanced foosball players find this shot challenging as it is taken from a blind spot.

The name “tic-tac shot” comes from the sound created from bouncing the ball continuously between two players. As you do so, you gradually move the ball to the offensive 3-man and shoot when you see a gap.

Even for a highly advanced foosball player, the aerial shot is extremely difficult, as well as against foosball rules in tournament play! Start by hitting the ball from a player on the far 3-man bar to one on the 2-man. Simultaneously twist both players’ feet toward each other, picking up the ball so it is held between their feet. Then sling the shot up through the air toward the goal!

You do not need to be able to perform all the shots to master the game.

You will probably become a better foosball player if you focus on one shot and become an expert at it than if you can perform many shots at a subpar level. 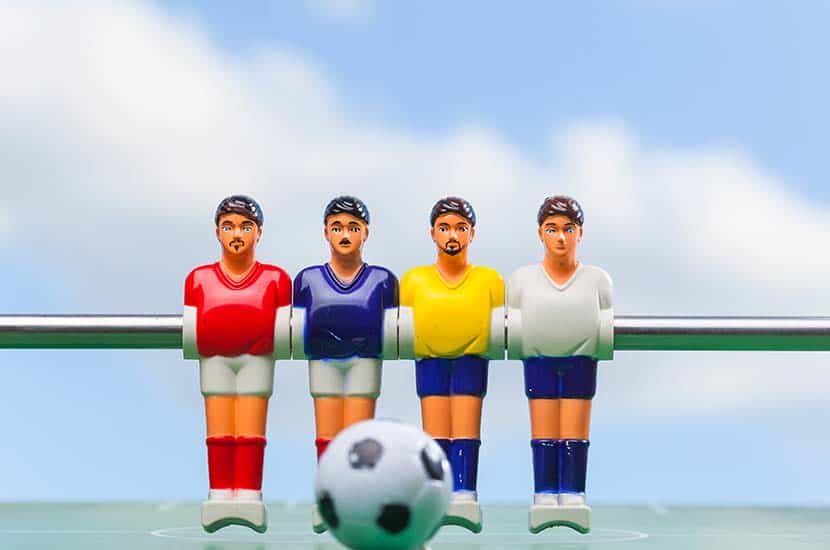 Keep Your Goalie And Defense In Sync

Be A Shot Blocker

Your 2-man rod is there to block shots, use it! Try to stay one step ahead of your opponent and every time they are about to shoot, slide your 2-man in front of them to block the shot.

Shoot From The Defense

Although we said that passing the ball is a better way to control the game, a well-timed, unexpected shot from the defense can work wonders. If your opponent slips up and you see a straight path to the goal, go for it!

Put All Your Players To Work

You have lots of players to work with, so use them to their full potential:

And that’s just the beginning! 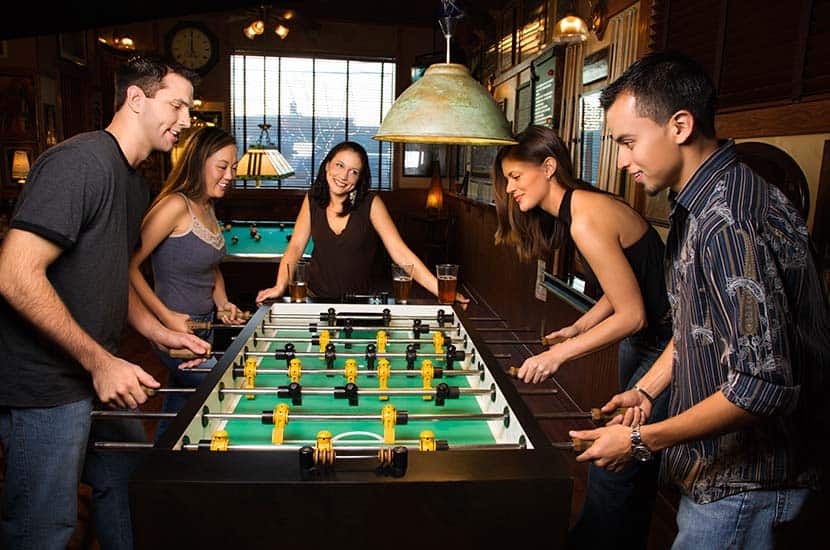 Reading articles like this can give you useful tips, but the only way you will really get better is by playing foosball! When you’re by yourself, take practice shots and work on your technique, then try these out when you’re playing foosball games.

If you really want to improve your game, you need to analyze yourself. If there are certain shots you are having trouble with, film yourself – this will make it easier to assess what you’re doing wrong.

Learn From Your Competition

Sure, winning feels great, but if you win every game, you’ll never improve.

When looking for opponents, try finding players who are better than you, as this will force you to adapt and refine your skills to win games. And don’t be afraid to ask highly skilled players for tips!

How Do You Hit Hard In Foosball?

You hit hard in foosball by giving yourself space in your stance and grip. Do not stand straight but rather slightly away from the table and lean forward at a 45° angle. Remain relaxed but firm in your core. Your arm should have enough range of motion to generate power and your grip should be quite loose.

You play foosball like a pro by learning to perform one shot perfectly. You can then learn other shots but being expert in one is better than master of none. Another important tip is to focus on short passes to maintain ball control. But the number one method? Playing as many games as possible!

How Do You Get Better At Passing In Foosball?

You get better at passing in foosball by practicing! Becoming great at passing is a very sound strategy for improving ball control and dexterity in general. Start by practicing a basic wall pass, drilling yourself and playing games. Once you have mastered that, you can try more advanced techniques like the wall bounce pass.

How Do You Aim In Foosball?

How Do You Do A Snake Shot In Foosball?

You do a snake shot in foosball by pinning the ball between the middle man on your 3-man rod. Your wrist should be the point of contact here, with your hand completely open. Next, move the man laterally, either pushing or pulling and spin your wrist on the handle to kick the ball.

We have given you many foosball strategies you can use to improve your skill game. This article was written with players of all different skill levels in mind, so take what is useful to you at your level. Either way, improving your foosball strategy involves playing as many games as you can – and don’t forget to enjoy it!